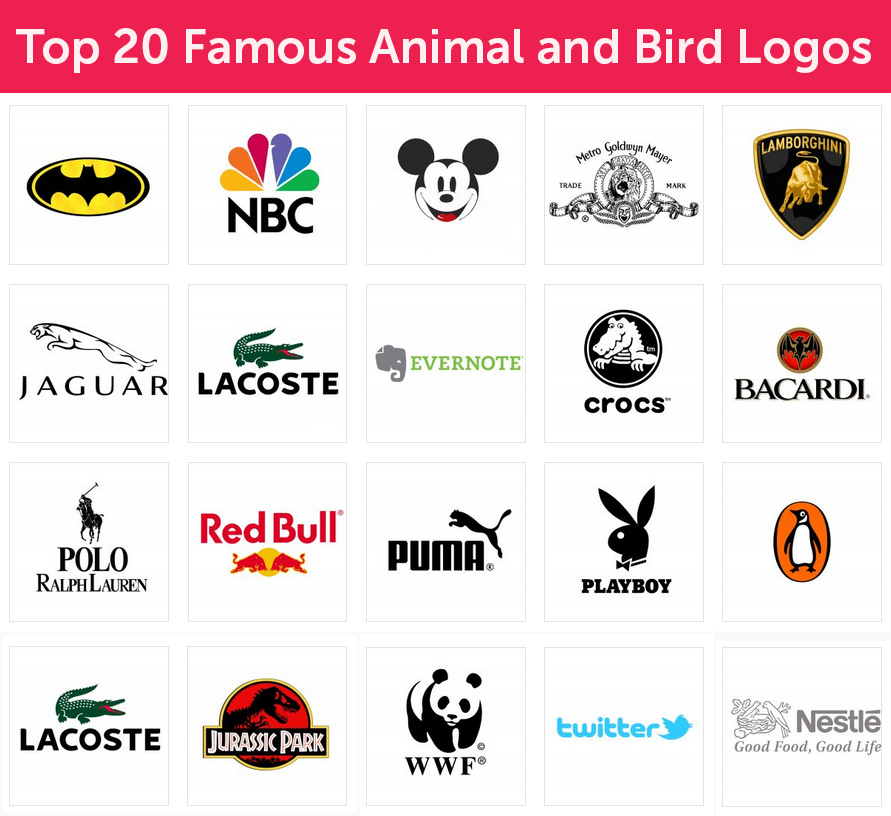 WHY ANIMALS ARE USED IN LOGOS?

Logos are well-thought designs, they are made keeping in mind the nature of the company or cause. So, why are animals used in logos? Every little thing in this Universe has its own value; likewise animals are symbolic of many traits. To make you understand this, let’s consider this famous idiom “As cunning as a fox”. If you call someone or something as cunning as a fox, you mean they are wily (trait) like a fox. Here are Top 20 Famous Animal and Bird Logos for your inspiration.

If you are a Tom and Jerry addict then you must be remembering Leo the Lion, the mascot of Metro-Goldwyn-Mayer production house.

The iconic logo was designed by Chip Kidd’ T-Rex skeleton illustrated in the original novel.

It is said that elephants have strong memory power, which is why we love this giant, when it comes to safekeeping our notes. One could also see a note-like image in its flapped ears.

Your super cute Crocs were originally designed as boating shoes.

The founder of Playboy first wanted to name it ‘Stag Party’ with a buck as its logo.

In case you don’t know, animals with backbones (vertebrates) are mammals, birds, reptiles, fish and amphibians. Remember Crocs above.

It was initially released in the name of ‘Phoenix’. No wonder why at times, the tail of the fox looks like fire flames to us.

Jaguar logos can be found in different colors such as black, gold, white and metallic grey. The color white and black stands for elegance and high performance, while metallic grey and silver stands for sophistication and perfection.

One of the highest selling energy drinks in the world. The very famous yet controversial energy drink has an official site where you can ask your queries related to the drink.

Why ‘Polo’ was named ‘Polo’? It’s because its founder Ralph Lauren, was a Polo player.

The orange background is result of Random House and Penguin Books merger. The designer of Penguin’s logo spent hours near Penguin’s pool of a zoo, to observe and draw them in every position.

Your beloved Mickey was drawn as a replacement for Oswald, the lucky rabbit, who used to be Disney’s star.

Did you ever notice that the drawing of bat in the logo, has been changing all these years in respect of its tiny ears, its flaps etc.

The Bull or Taurus of this car brand was chosen as its logo, because the founder zodiac sign was Taurus.

Only similarity between Jaguar and Puma logo is that both the animals have been designed in pouncing position. Cheatsheet: In Jaguar you won’t find any color fill while in Puma’ logo, the Puma has been color filled.

If you want to find out a fake Lacoste then check its logo, most fakes have bad distorted logos in it, also the original uses numbers for telling its product size not ‘S’,’M’ or ‘L’.

Why the iconic bat? It’s because the founder’ first distillery rafters was a house full of bats.

National Broadcasting Company (NBC) have changed their logos intermittently but the most famous of all are ‘The Peacock’ logo.

Earlier in the beginning, it had only one bird sitting on the nest. The Swiss founder’s family name, means ‘nest’ in German.

Ever wondered why only Panda was chosen for its logo? Here’ the answer, it’s because the creators felt that, the endangered pandas are loved by many people around the globe. They also wanted to save printing cost by just using black and white color on their logo.

Just a reminder, human beings are social animals too. Hence, we are only using our comrades in our logos, not ‘wild things’.